About 275 species in North America north of Mexico At first glance, skippers look halfway between butterflies and moths. Like other butterflies, many members of this group of small- to medium-sized butterflies are fairly colorful (especially ones that are orange or have elaborate markings), and like most other butterflies, they visit flowers and fly during the day. Also like butterflies, they have club-tipped antennae — but in nearly all skippers, each antenna tip is bent like a hook (this is a key ID character). Meanwhile, like moths, skippers have short, chunky bodies; several species are drab brown, gray, or tan; and many hold their wings flat out to the sides.

Larvae: Skipper caterpillars have a remarkably large head, compared to the width of their bodies. Often the head is darker colored than the rest of the body. Just behind the head, their bodies are extra narrowed, which accentuates the head even more. Mostly, they are green, tan, gray, or beige, with no or few hairs.

Similar species: Brush-footed butterflies only walk on 4 legs as adults, while skippers walk on all 6. Geometrid moths typically hold their wings flat and out to the sides, much like the spread-wing skippers, but geometrids usually have rather narrow, not chunky bodies, and they lack the skippers’ distinctive hook-clubbed antennae. Silver-Spotted Skipper
The silver-spotted skipper is easily recognized by its dark color, gold spots on the forewings, and the distinctive silvery patch beneath the hindwing. Delaware Skipper
The undersides of the Delaware skipper's wings are solid orange. It's found statewide in a variety of habitats. Fiery Skipper, Wings Folded
Seen from below, fiery skippers are plain orange, with a sprinkling of small dark spots. Least Skipper
One of the smallest skippers in the eastern United States, the least skipper is found in moist, grassy areas, usually near water.

Horace's Duskywing
Look for Horace's duskywing at flowers and mud puddles, in forests, and along roadsides.

Peck's Skipper
Peck’s skipper is found in Missouri’s fields, lawns, and other open habitats from May through October. Identify it by the one yellow hindwing rectangle that is wider than the others. Peck's Skippers Mating
Adult Peck's skippers fly May through October. Like most skippers, males perch on plants and other objects to locate females, which will lay eggs singly on grasses. Northern Cloudywing
Of Missouri's three cloudywing skippers, the northern cloudywing is most likely to be found in the woods. Males dart out at anything that remotely resembles a female of the species. Sachem Female, Wings Folded
The underside of female sachems is light brown with pale spots forming a V-shape on the hindwing. Sachem Female, Wings Spread
On female sachems, the forewing upperside has some white or transparent spots amid the center’s dark background. Crossline Skipper
Viewed from below, crossline skippers are brownish with very few distinct markings: a few light dots near the tip of the forewing, and a vague light band on the hindwing.

Tawny-Edged Skipper, Wings Folded
The tawny-edged skipper is a grass skipper that is often confused with the similar-looking crossline skipper. Tawny-Edged Skipper, Wings Spread
Wide-ranging and common, the tawny-edged skipper can be seen May through October in a variety of grassy, open habitats. 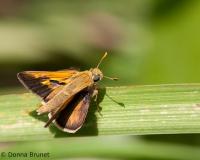 Tawny-Edged Skipper, Male
Male tawny-edged skippers, like most other male skippers, perch and patrol their territories.

Many Missouri species are found in locally abundant places or scattered localities near their favorite food plants. Since some food plants are located mainly in native tallgrass prairies, the skippers that feed on them form colonies in those limited habitats. Other species, which feed on a wide variety of plants, are more widespread.

Skipper larvae are rarely seen, because they typically roll leaves into shelters and tack them closed with a bit of silk, or else they join a few leaves together and hide within.

Adults take nectar from flowers using their extra-long proboscises (“tongues”), and it’s near flowers where most people see skippers. Skippers also commonly “puddle,” drinking moisture from mud puddles or stream banks, or even take moisture and minerals from bird droppings.

Statewide. Different species are associated with different habitats — with some tolerating a wide variety of habitats, and others being restricted to distinct habitat types — so they have their own distributions within the state.

At least three skippers are Missouri Species of Conservation Concern:

Dukes’s and Ottoe skippers are both considered critically imperiled, which is the last step before being listed as “threatened.”

Many skippers have multiple broods, while some have only one generation a year. Like other butterflies, skippers hatch from eggs as caterpillars. The caterpillars grow and molt a number of times. When fully grown, the caterpillar pupates and emerges as a winged adult. Female skippers typically lay eggs singly on or near suitable host plants. Grass skipper caterpillars build shelters by rolling blades of grass around their bodies; this is how they spend the winter.

In some species, male skippers stake out a territory, perching on a prominent object and waiting for females to fly near. In other species, males seek females by patrolling an area. Male grass skippers are often seen fluttering rapidly around females, wafting the pheromones from the stigma patches on their wings, in their attempts to woo potential mates. Males also often dash out to inspect and drive away potential intruders.

Some skippers, though they may breed in our state during the summer, cannot survive Missouri winters. The sachem and fiery skipper are examples. They must recolonize our state each year, as populations that survive winters to our south gradually expand their ranges northward over the spring and summer.

Most skipper species are not economically important, even though their caterpillars eat plants.

Many skippers have creative names derived from Greek or Roman mythology or other Classical literature. The entomologists who named them in the 1800s had educations that emphasized ancient literature.

Butterfly gardening is increasingly popular, and native plants can be a big part of the plan. Skippers and other butterflies benefit, while we have fun watching and photographing them.

Butterfly watching, and butterfly photography is a “thing.” Many point-and-shoot cameras can capture surprisingly good close-up images of these living jewels.

A skipper’s chunky thorax houses robust muscles for operating the wings, which helps explain their mastery of fast flight. For skippers, flight is essential for survival (escaping predators) as well as for reproduction (chasing away rivals, patrolling for potential mates).

Many predators eat skippers, including birds, mammals, reptiles, and amphibians. A skipper that falls into a lake may be eaten by a fish. But hiding in the centers of the flowers they visit are crab spiders, ambush bugs, praying mantises, and other predators that are just as hungry.

Aerodynamically, a skipper’s rounded and shorter wings are less efficient for long distances and better for short, quick, darting flights. Compare skipper wings with, say, those of monarch butterflies, which migrate to Mexico. Then, think about the long, pointed wings of geese, which migrate across continents, and the short, rounded wings of turkeys, which can clap themselves quickly into a tree.

More than 700 species in North America north of Mexico