Tulip tree is a large, stately tree with a long, clear trunk and a pyramidal crown.

Leaves are alternate, simple, 4–6 inches long and broad, tip notched or V-shaped at the center, with 2 lobes near the tip and 2 or 4 lobes on the lower sides; margin entire, lobes pointed; leaves turn clear yellow in autumn. Tulip Tree Leaves
The leaves of tulip tree are very distinctive. Some people say they look like the outline of a cat's head. Tulip Tree In Fall Color
Tulip trees, though native to only southeastern Missouri, are popular statewide as landscaping trees. Tulip Tree Bark and Trunk
The bark on a mature tulip tree is gray to brown, with rounded ridges and long, deep grooves. Tulip Tree Fruit Cone
The fruits of tulip tree are woody, brown, conelike structures. The seeds that develop along the central axis are winged. At Crowley’s Ridge, occurs in moist woods of ravines, in upland woods, and along streams. Along the Mississippi River in southeastern Missouri, occurs at the base of wooded bluffs. An important ornamental tree for lawns, parks, and cemeteries. One of the most attractive and tallest of eastern hardwoods. Fast-growing. In cove forests in the Appalachians, it can reach 300 years old. One of our most valuable trees. Tulip tree is in the magnolia family, but early lumbermen called it "poplar" because its wood is lightweight, like that of poplars and birches (which are in different families). In cultivation, this tree grows rapidly in good soil, has excellent form, and is disease resistant. It will not grow in the shade.

An important landscaping tree. The wood is used for veneer, plywood, crates, furniture, cabinets, musical instruments, and more. Native Americans used bark tea as a remedy for numerous ailments. An alkaloid extract from the bark was once used as a heart stimulant.

The seeds are eaten by at least 10 species of birds, as well as by squirrels and other small rodents. The leaves are eaten by deer and rabbits. It is a favorite nesting tree of many birds. A considerable amount of nectar is produced and harvested by bees. 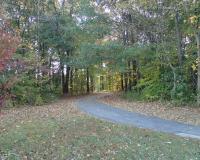