Rough-leaved dogwood is one of Missouri's hardiest shrubs. It is one of five species of dogwoods native to Missouri.
John D. Byrd, Mississippi State University, Bugwood.org
Family:

Dogwoods are shrubs or small trees. The buds are scaly, and the flowers, fruits, and bark are distinctive.

The leaves are opposite (alternate in one of our species), simple, with entire or wavy margins, dark green upper sides and usually with paler undersides. The secondary leaf veins are strongly arched toward the leaf tip, becoming irregularly fused toward the leaf margin. The leaves typically turn various shades of orange, red, and maroon in the fall.

The flowers are positioned in clusters at the branch tips. In flowering dogwood (C. florida), these clusters are subtended by 4 showy white bracts that resemble petals. In our other species, the flowers lack such bracts and are not very showy, with only small, white, cream-colored, or greenish-yellow petals.

There are two major groups of dogwoods. One group has red fruits and large petal-like bracts beneath the flower cluster — among Missouri’s native dogwoods, it is represented only by flowering dogwood. The other group, which comprises all our other native dogwoods, has either blue or white fruits and completely lacks or has only very small bracts beneath the flower cluster.

Missouri has 5 species of dogwoods:

Height: Swamp dogwood, our smallest species, reaches 3–13 feet; gray dogwood reaches 6–16 feet; alternate-leaved and rough-leaved dogwood may be 6–20 feet; and flowering dogwood, our largest species, grows to be a small tree at 10–49 feet. 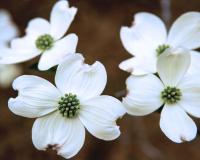 Flowering Dogwood Branches In Fall Color
Flowering dogwood is one of our standout species for fall color. Flowering Dogwood In Fall
We enjoy the fall leaf color and red berries of flowering dogwood, as well as its springtime flowers. Different species of dogwoods have varying habitats, with some species preferring drier, upland sites and others preferring moist, rich lowland or even swampy, wet habitats. All may be found along roadsides and railroads, thickets along crop fields and pastures, and similar habitats.

Dogwoods are prized for their hard wood, which withstands sudden hard shocks and wears smoother, not rougher, with use. It has been used for items ranging from spears and daggers to weaving shuttles, golf heads, pulleys, wedges, mallet heads, knitting needles, hog yokes, hay forks, cutting boards, mountain dulcimers, decorative pen barrels, cooking spoons, and more. If you hammer straight onto the end of a stick of dogwood, it won’t splinter or broom out. One theory for the name “dogwood” is that it’s derived from “dag wood,” for making daggers and other sharp tools.

Several dogwood species are cultivated in the Midwest as hedges, specimen plants, and ornamentals — especially cultivars with red or yellow stems. Flowering dogwood, Missouri’s state tree, is lovely in all seasons, with white inflorescences in spring, deep green leaves in summer, red berries in late summer, bright reddish foliage in fall, and interesting bark and buds in winter. The others lack the white inflorescences but instead may have striking blue or white berries that contrast with their purplish fall foliage.

Dogwoods contribute to the overall look of fall color, and fall color is good for Missouri tourism. Would driving to a fall festival out in the country be the same without the pretty autumn scenery?

Native Americans apparently prepared a tobacco substitute from strips of the bark of several species under the name kinnikinnick.

Some nonnative dogwoods produce fruits that are edible for humans. One of these, the European species C. mas (Cornelian cherry), is made into jams and syrups. The fruit of our native dogwoods, however, is not edible for people.

Various species of dogwoods have been used worldwide for a variety of medicinal uses, including as a substitute for quinine in treating fevers.

Dogwood fruits provide food for various mammals and birds and are recommended for wildlife plantings. Among the animals that eat them are northern bobwhite, wild turkey, squirrels, white-tailed deer. Among the many songbirds that may nosh on dogwood fruits are waxwings, robins, mockingbirds, catbirds, sparrows, titmice, cardinals, juncos, mourning doves, and blue jays.

Dogwoods are larval food plants for several groups of butterflies and moths, including the spring azure, dogwood thyatirid, one-spotted variant, friendly probole, and false crocus geometer. Many other insects feed on or drink sap from the foliage; one example is the dogwood spittlebug, a squat, black-and-yellow hopping insect. All of these insects, of course, are food for birds and other insect-eating animals.